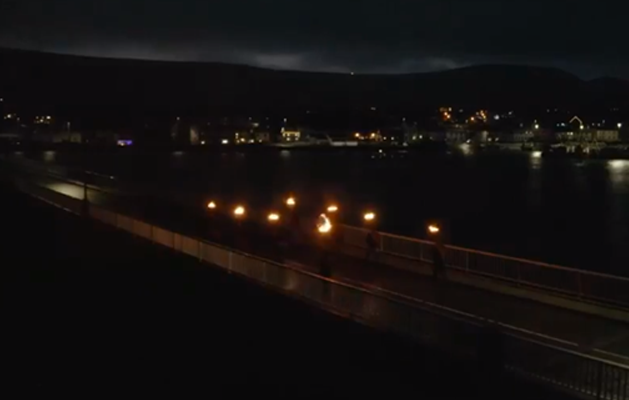 Portmagee is renowned for its traditional New Years celebrations. People travel from all over the world to spend New Years eve in the rural fishing village located just off the Ring of Kerry. All the locals gather to celebrate with a traditional custom that is over 100 years old and is done in the form of a street party. The celebrations aim to resemble what occurred on New Years Eve 1727 when the village was awoken by the sound of drums and drone of pipes. The locals rushed outside to find the crew of a ship carrying torches surrounding a feeble looking “Old Man” wearing rags struggling to make his way up the pier. He continued to make his way along the main street before falling over. His crew helped him get back on his feet, but he fell twice more. A few moments later at exactly 12 O’ Clock a gunshot was heard, the music was silenced, and the “Old Man” fell for the very last time.

We can only assume the locals felt shock and sadness for the poor man who had just fallen to the ground in front of them. Suddenly the music began to play once again much livelier this time and a fresh-faced young man appeared out of the darkness. He shook the hands of the local men and kissed the local women in celebration of the New Year the just begun. Here was the “New Year.”

The sailors explained to the confused locals that this was how the celebrated New Years Eve in their hometown.  The locals have reenacted this celebration every New Years Eve which brings a great atmosphere to the small village.

Ringing in 2021 had to be done differently due to the pandemic. A group of locals virtually got together to form a plan so that the New Years celebration could still go ahead in some way. A virtual New Years celebration was had that included some local businesses and videos of previous years celebrations. This year torches were lit and carried by men out over the Valentia Bridge. This was done to commemorate the fact that the Maurice O’ Neil Memorial Bridge celebrated its 50th birthday on January 1st, 2021. The campaign for building the bridge first began in 1911 but was suspended due to World War 1 and subsequently the 1916 Rising followed by the War of Independence and the Civil War. A renewed campaign for the bridge began in the 1940’s and the investigator was the late Con Lyne of Valentia. After a prolonged campaign, the Bridge Committee at the time decided to hold their own opening of the Bridge on New Years Day 1971. The Bridge was blessed by the Bishop of Kerry Dr. Eamonn Casey and Fianna Fáil Minister Neil Blaney was also in attendance. The bridge was named the Maurice O’ Neil Memorial Bridge in honor of Maurice from Cahersiveen who was executed in 1942 for republican activities in which a detective Morduant was shot dead while the Fianna Fáil government under De Valera was in power.

The virtual celebrations were a huge hit between all the viewers and video messages were sent too and from loved ones who were not able to travel home this year. It really showed the beautiful community we live in and that is what these celebrations are all about.