The Skellig Islands are of great significance for many reasons and one of those reasons is its renowned birdlife. The island is home to various species of sea birds particularly Sceilig Beag which is famed for its large colony of over 25,000 pairs of gannets making it the largest colony in Ireland and among the largest in the world.  This makes touring around the Skellig Islands by boat an awe-inspiring trip to say the least. Gannets are not the only species present here as you will also spot Puffins, Storm Petrels, The Manx Shearwater, Kittiwakes and much more.

The gannet is the first bird you will see when you reach Skellig Beag and when I say these birds cover the whole island, I mean it! If there are some smaller birds seen on the lower ledges of the island that is only because these perches do not offer enough space for the heavy goose-sized gannet. Every other nook and cranny of this 6.5 hectare, 135m crag is taken up by the 23,000 nesting pairs. First year gannets migrate to the west coast of Africa or the Mediterranean in November while older birds will travel much shorter distances. For two months the gannet chick will remain in the nest being pampered and overfed. The chick is then deserted and starves for two weeks before building up the courage to go find its own food by plunging into the sea. If the young bird survives this venture it has a strong chance of living up to 40 years. 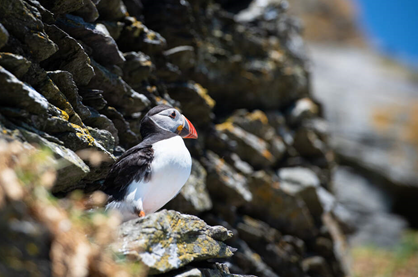 The Puffin is the most popular bird associated with Skellig Michael and plays a huge part in the time of year people decide to visit the island with a lot of visitors asking, “What’s the best time to go if you want to see the Puffin?” The Puffin is easily recognised by its black plumage above, white below, grey cheeks and bright orange bill with its most striking feature being its bill. In Winter it is a dull yellow and small but in Summer it is a bright red, blue and yellow, laterally flattened and very strong. They are generally a quiet bird but if in a tussle over a nesting site they can fight fiercely. 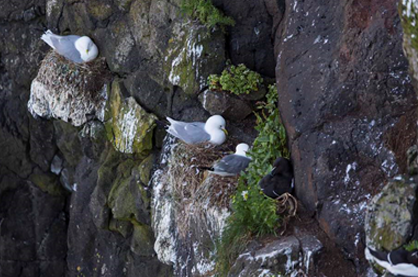 At the end of March some of the Puffins will begin to return to Skelligs after their adventures to the North Atlantic and will swim around the rock for the first few days. In mid- April, the whole flock will arrive back over the course of a couple of days to settle on the island. Skelligs will see Puffins in every inch of its island until the second week of August when they will all depart as quickly as they arrived.

The Kittiwake is considered the noisiest bird on Skellig Michael. It nests on the ledges above the landing, at Cross Cove and at Seal Cove. Its wings and mantle are ash grey in colour and the remainder of its plumage is pure white. It is similar in size to the common gull but is distinguished by its black triangular wingtips, olive/ brown legs, a yellow bill, and dark eye. The bird returns to Skellig around March however it has been recorded that some Kittiwakes have returned as early as December. It lays three eggs in May which are stone coloured with grey and brown speckles. Fights between adults on the narrow ledges frequently results in eggs or chicks being hurled over the edge and into the sea where predators are watchful for an easy meal meaning infant mortality rates may be high in these communities. 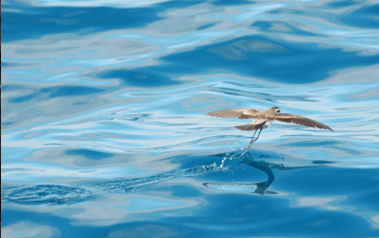 The Storm Petrel is the smallest European seabird and only visits land while breeding. It is sooty black with a white rump and a square black tail. There is a large breeding colony of Storm Petrels present on Skellig Michael, but these are very rarely seen during the day as they remain hidden in their nests or far out at sea. These birds return to Skelligs at the end of April. By the end of June, the bird lays one oval egg- white with rust spots- which is laid in a burrow under a stone or deep within the stonework of the old monastery buildings with little to no nesting material. The incubation period usually takes 5 or 6 weeks and during this time the bird will often wander great distances for food leaving the egg/chick unattended for days. If this bird is interfered with it can leave out a foul-smelling oil. The bird takes to the open sea again in October.

The Manx Shearwater is a very clumsy bird on land and therefore is rarely seen there during the day. Even on calm nights they prefer to hide away and its only on wind, stormy nights that the bird will venture out. The bird is sooty black above and white underneath and is easily recognised by its distinctive flight- very low over the sea gliding frequently with stiff wings. The Manx Shearwater returns to Skellig in March following its migration to South America. They breed in burrows and will use the same burrow year after year. They lay one oval white egg at the end of April which both birds sit however the nest can be left unattended for days while the birds fly quite a distance in search of food. The incubation period for this bird is 7 and a half weeks and it remains in the nest for a further 10 and a half weeks becoming heavier and fatter than the parent. It suffers a week’s starvation before venturing out to sea.

There are a lot of other species present on both islands each with its own unique characteristics. While you visit the islands, you will feel overwhelmed by the site of the birds on the island of Skellig Beag. From a distance you will see white specks on the rock but as you venture closer it will become clear that each speck is in fact a bird and the size of this colony will become even more real!

All of our Skellig Boat Tours allow you to circle both islands getting up close views of the wonderful birdlife. To book a tour please click here.