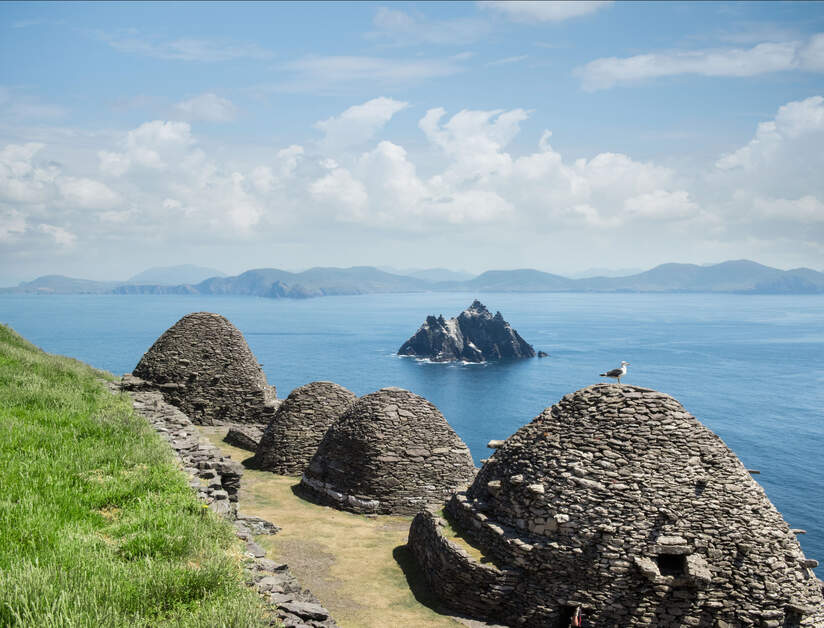 Skellig Michael is located 8 miles off the island of Valentia, in South West Ireland. Skellig Michael is known for its rugged beauty. The island has been the centre of many stories, Irish fairy tales, myths and legends throughout the years.

The first known reference of Skellig Michael was in Irish Legend when it is named as the burial place of Ir, son of Milesius who drowned during the landing of the Milesians. 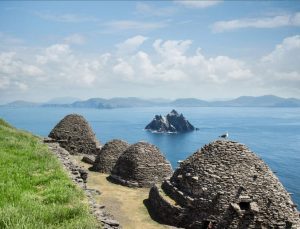 Cashel. Daire Domhain the “King of the World” was said to have prepared for battle with Fionn mac Cumhaill and his Fianna on Sceilig Mhichíl. During the 6th century a group of monks ventured to this offshore island where they founded a monastery under the instruction of St. Fionan. They built a total of 6 corbelled beehive huts which still stand on the island today. It’s believed that there were a maximum of 12 monks and one Abbot residing on the island at one time.

A number of Viking Attacks took place on the island. Legend states the hermit of Skellig baptised Olav Trygvasson the Viking in 993 who later became king of Norway.

The island was eventually abandoned due to worsening weather conditions. It remained a place of pilgrimage for years to come. Pilgrims arrived at Easter to pray and kiss the stone overlooking the ocean at the “Needles Eye”. As time went on the type of pilgrims changed dramatically. Instead of fasting and praying, the island was used for young couples to court and dance. This lead to a “Skelligs List” being formed. This was a list of poems both amusing and insulting. The list was used throughout the 19th and 20th centuries to shame local bachelors and spinsters into marriage.

If you would like to learn more about these incredible Skellig Islands, you can visit The Skellig Experience on Valentia Island.